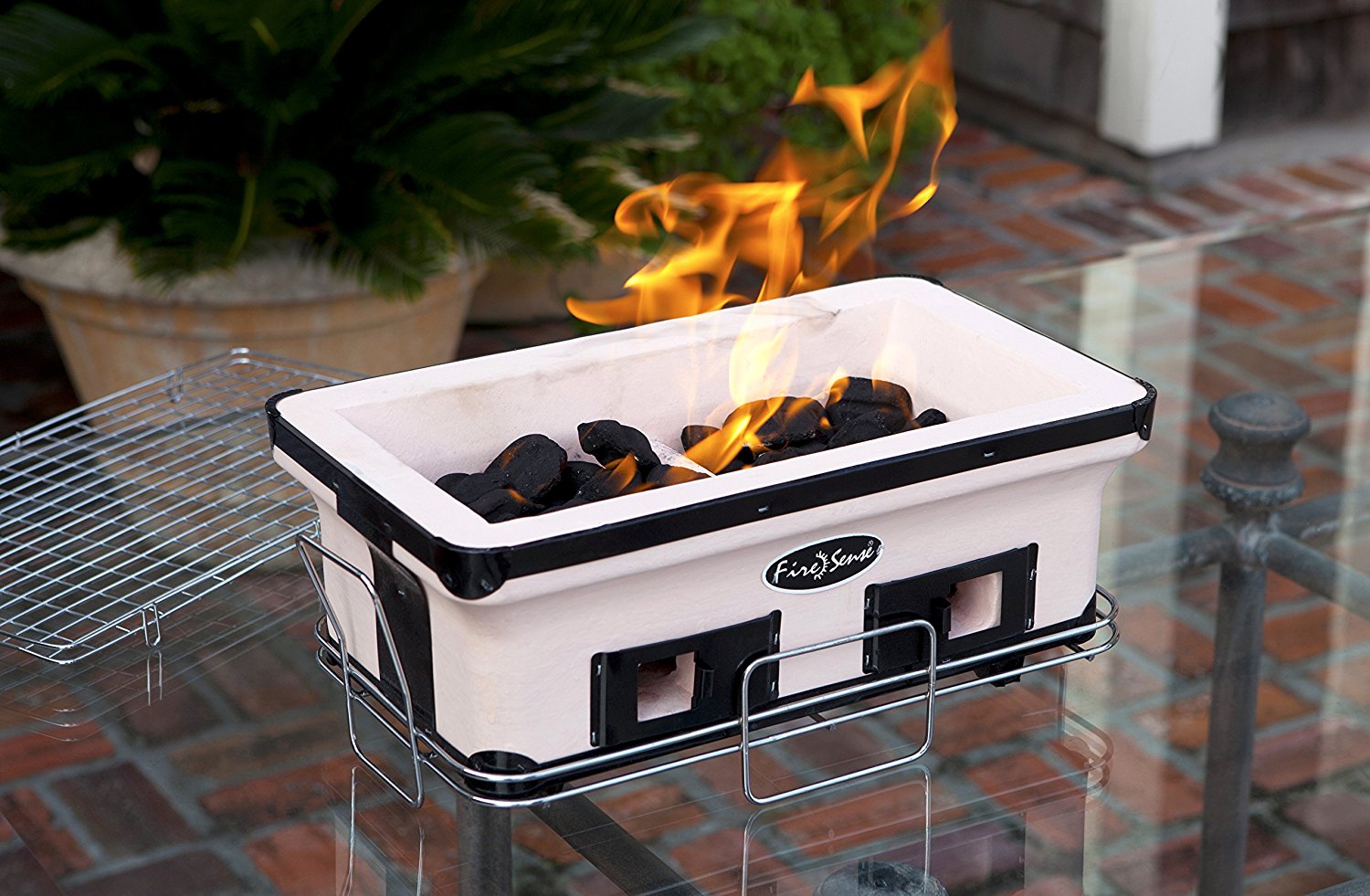 The Fire Sense Large Yakatori Charcoal Grill has been marketed as a low-cost solution to those buyers who are fans of traditional Japanese Hibachi style cuisine. What is Hibachi? Well, the Hibachi style refers to the traditional use of Clay Bowls to completely insulate the Charcoal. The benefits of this are two-fold:

Problem is that while many western attempts have been made at recreating this Hibachi style for a cheap price, very few have worked. Most attempts are just plain awful. Somewhere such abject failures that they turned out to be ordinary Grills with the Hibachi tag laid on for no apparent reason. So how did the Fire Sense Large Yakatori Charcoal Grill fare? Read on for the details.

The design is pretty good. I liked that they used Ceramics instead of the usual thick Steel or Cast-Iron. Cast-Iron, in particular, is great for Grills because it’s durable and tends toward even cooking. But if you want the Hibachi style, it just doesn’t provide enough insulation. So Yakatori went a different way. They threw in Ceramics which is the next best thing down from the traditional Japanese Clay Bowls. You get good insulation from Ceramics and you get low running costs given that Ceramics evenly distribute heat meaning less Charcoal is needed. Ceramics also give you that juicy Fire Pit taste. So the Ceramics was a good move. Then they put in Vents. The problem here is that traditional Japanese Hibachi Grills don’t tend to have vents given that the goal is complete insulation from the outside. The good news though is that the Vents are poorly designed and don’t really work to keep them closed and enjoy cooking. The measurements are 7x18x10 inches, so pretty compact compared with other models in this price range. The weight is 25 pounds though, so it’s heavy for a portable and you might need two people to carry it out of the car when camping or tailgating.

How Much Can I cook On This?

Well, the cooking area is 157 Square Inches so it’s quite big for a portable meaning you should be able to cook for a family for four all in one sitting. Two burgers and two Kebabs can go on there at one time.

Given that it uses Ceramics the cook time is fast. It fires up within five minutes and will do burgers and steaks in less than ten minutes. The temperature reaches 500 degrees which are always a good sign.

Stopping this Grill from being one of the greats; are the Grates. After slapping on those beautiful Ceramics all over the unit, they put on these rather useless thin Steel Grates in order to save money. Food does stick to them and without the Ceramics tending toward even heat distribution you’d be creating nothing on this Grill. But since you do have the Ceramics you can still make some amazing meals and they do taste like tradition Japanese Hibachi cuisine.

Which brings us to Cleaning

There is a bit of cleaning to be done given that food can stick both to the Ceramics and the Grates, So it’s not one of those 5-minute wipes and rinse clean jobs. There’s some scraping to be done here.

What are the Clips for?

They’re actually very interesting and I’d like to see this more on Grills. They’ve put Clips on either end of the Grates. The idea is that buyers don’t like Hot-dogs rolling over and Sausages blowing the wind burning one side. So you can clip foods in place at any time meaning it’s going nowhere until you decide. This is quite innovative.

If you don’t mind hauling this 25 pound Grill out of the car and back in again. And if you can put up with those shoddy Grates you might actually get a good deal on this Grill. For me, it’s one of the better attempts at traditional Japanese Hibachi cooking. The key is ceramics. Even with the cheap Grates, the Ceramics allow enough insulation for you to create juicy Hibachi style foods with an even PH balance and that lovely Fire Pit taste. It’s not restaurant standards but Burgers and Kebabs do have that Clay taste and they do taste different than those you’d get from a cast-iron Grill. There’s some cleaning to be done but the fast cook times and the 157 Square Inches of space more than makeup for that. I’ve seen some awful attempts at Hibachi Grilling (and reviewed them) but this is honestly rather good. 🙂